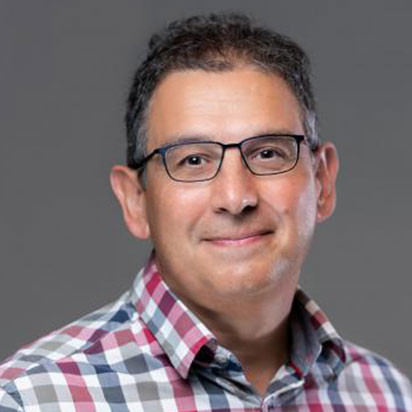 Dr. Samuel Aparicio (BM, BCh, PhD, FRCPath, FRSC) is the Nan & Lorraine Robertson Chair in Breast Cancer Research, holds the Canada Research Chair (Tier 1) in Molecular Oncology, and is the recipient of the 2014 Aubrey J Tingle Prize. He is also Head of the Department of Breast and Molecular Oncology at BC Cancer Research, part of the Provincial Health Services Authority, and a Professor in the Department of Pathology and Laboratory Medicine at UBC.

Dr. Aparicio graduated in medical and natural sciences from Cambridge University (UK), clinical medicine from Oxford, and subsequently in internal medicine and pathology. After doctoral work with Sydney Brenner in Cambridge, he held a Wellcome Trust Career Development Fellowship at the Wellcome/CRUK Developmental Biology Institute. From 2000-2005 he was a senior investigator in the Department of Oncology, Cambridge. He was a co-leader of the international consortium that sequenced the genome of the pufferfish Fugu rubripes in 2002. He moved to Vancouver in 2005.

Dr. Aparicio’s research program encompasses the fields of cancer genomics, mouse genetic models, high throughput screens, small molecule chemical probes and translational breast cancer research. His most recent work on the molecular taxonomy of breast cancer led to identification of new genes that could change the way breast cancer is diagnosed, and form the basis of next-generation treatments. This discovery was preceded by another breakthrough in decoding the genetic makeup of the most-deadly form of breast cancer, known as triple negative subtype. Dr. Aparicio is also working to develop quantitative measures of clonal fitness in patients, including methods for single cell genome sequencing and PDX models of human cancer. He collaborates widely with other groups, with current projects including the genomic and biochemical analysis of lymphoma, ovarian cancer, and several rare pediatric cancers. He was a co-founder of Paradigm Therapeutics (now, Takeda Cambridge) and currently Contextual Genomics Ltd. He was elected to the Royal Society of Canada in 2016 and is honoured as a University of British Columbia Distinguished University Scholar (2017). His contributions to academic research have been widely published in scientific and clinical journals such as Nature, Science, Cell and the New England Journal of Medicine. He is the recipient of numerous awards from academic as well as industrial institutions.

Results of the phase I CCTG IND.231 trial of CX-5461 in patients with advanced solid tumors enriched for DNA-repair deficiencies.

Interfaces of Malignant and Immunologic Clonal Dynamics in Ovarian Cancer.

Impact of serum HER2, TIMP-1, and CAIX on outcome for HER2+ metastatic breast cancer patients: CCTG MA.31 (lapatinib vs. trastuzumab).

Discovery of Novel 1,4-Diacylpiperazines as Selective and Cell-Active eIF4A3 Inhibitors.

CX-5461 is a DNA G-quadruplex stabilizer with selective lethality in BRCA1/2 deficient tumours.

The somatic mutation profiles of 2,433 breast cancers refines their genomic and transcriptomic landscapes.

Lessons learned from the application of whole-genome analysis to the treatment of patients with advanced cancers.

Combined Use of Gene Expression Modeling and siRNA Screening Identifies Genes and Pathways Which Enhance the Activity of Cisplatin When Added at No Effect Levels to Non-Small Cell Lung Cancer Cells In Vitro.

In vivo radioimaging of bradykinin receptor b1, a widely overexpressed molecule in human cancer.

A tumor DNA complex aberration index is an independent predictor of survival in breast and ovarian cancer.

Genome-driven integrated classification of breast cancer validated in over 7,500 samples.

Up-regulation of the interferon-related genes in BRCA2 knockout epithelial cells.

A transgenic mouse model demonstrating the oncogenic role of mutations in the polycomb-group gene EZH2 in lymphomagenesis.

The omics of triple-negative breast cancers.

Solution NMR structure and histone binding of the PHD domain of human MLL5.

TDP1 and PARP1 deficiency are cytotoxic to rhabdomyosarcoma cells.

The implications of clonal genome evolution for cancer medicine.

A new genome-driven integrated classification of breast cancer and its implications.

DriverNet: uncovering the impact of somatic driver mutations on transcriptional networks in cancer.

The landscape of cancer genes and mutational processes in breast cancer.

The life history of 21 breast cancers.

PPM1H is a p27 phosphatase implicated in trastuzumab resistance.

Opening Pandora's Box--the new biology of driver mutations and clonal evolution in cancer as revealed by next generation sequencing.

Molecular alterations between the primary breast cancer and the subsequent locoregional/metastatic tumor.

Mll5 is required for normal spermatogenesis.

Comprehensive analysis of mammalian miRNA* species and their role in myeloid cells.

The testosterone-dependent and independent transcriptional networks in the hypothalamus of Gpr54 and Kiss1 knockout male mice are not fully equivalent.

ZNF703 is a common Luminal B breast cancer oncogene that differentially regulates luminal and basal progenitors in human mammary epithelium.

The orphan adhesion-GPCR GPR126 is required for embryonic development in the mouse.

P-cadherin expression as a prognostic biomarker in a 3992 case tissue microarray series of breast cancer.

Does massively parallel DNA resequencing signify the end of histopathology as we know it?

Evolutionary concepts in biobanking - the BC BioLibrary.

p53: a new kingpin in the stem cell arena.

Mutation of FOXL2 in granulosa-cell tumors of the ovary.

A loss of function allele for murine Staufen1 leads to impairment of dendritic Staufen1-RNP delivery and dendritic spine morphogenesis.

Kisspeptin and GPR54 immunoreactivity in a cohort of 518 patients defines favourable prognosis and clear cell subtype in ovarian carcinoma.

Epidermal growth factor receptor (EGFR) is transcriptionally induced by the Y-box binding protein-1 (YB-1) and can be inhibited with Iressa in basal-like breast cancer, providing a potential target for therapy.

Kisspeptins and GPR54--the new biology of the mammalian GnRH axis.

PEDF and the serpins: phylogeny, sequence conservation, and functional domains.

Fugu genome analysis provides evidence for a whole-genome duplication early during the evolution of ray-finned fishes.

The GPR54 gene as a regulator of puberty.

Whole-genome shotgun assembly and analysis of the genome of Fugu rubripes.