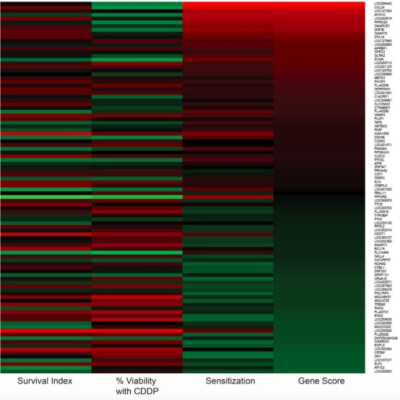 Platinum-based combination chemotherapy is the standard treatment for advanced non-small cell lung cancer (NSCLC). While cisplatin is effective, its use is not curative and resistance often emerges. As a consequence of microenvironmental heterogeneity, many tumour cells are exposed to sub-lethal doses of cisplatin. Further, genomic heterogeneity and unique tumor cell sub-populations with reduced sensitivities to cisplatin play a role in its effectiveness within a site of tumor growth. Being exposed to sub-lethal doses will induce changes in gene expression that contribute to the tumour cell’s ability to survive and eventually contribute to the selective pressures leading to cisplatin resistance. Such changes in gene expression, therefore, may contribute to cytoprotective mechanisms. Here, we report on studies designed to uncover how tumour cells respond to sub-lethal doses of cisplatin. A microarray study revealed changes in gene expressions that occurred when A549 cells were exposed to a no-observed-effect level (NOEL) of cisplatin (e.g. the IC10). These data were integrated with results from a genome-wide siRNA screen looking for novel therapeutic targets that when inhibited transformed a NOEL of cisplatin into one that induced significant increases in lethality. Pathway analyses were performed to identify pathways that could be targeted to enhance cisplatin activity. We found that over 100 genes were differentially expressed when A549 cells were exposed to a NOEL of cisplatin. Pathways associated with apoptosis and DNA repair were activated. The siRNA screen revealed the importance of the hedgehog, cell cycle regulation, and insulin action pathways in A549 cell survival and response to cisplatin treatment. Results from both datasets suggest that RRM2B, CABYR, ALDH3A1, and FHL2 could be further explored as cisplatin-enhancing gene targets. Finally, pathways involved in repairing double-strand DNA breaks and INO80 chromatin remodeling were enriched in both datasets, warranting further research into combinations of cisplatin and therapeutics targeting these pathways.