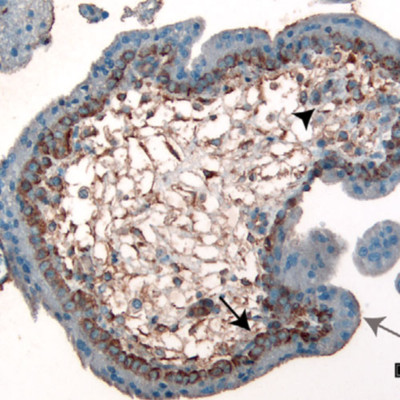 Kisspeptins and their G-protein coupled receptor, GPR54 are required for GnRH release and have been associated with anti-metastatic tumour cell behaviour in model systems. The latter might suggest that their overexpression would be associated with a better prognosis in cancer. However, kisspeptin/GPR54 interactions (autocrine, paracrine, and/or endocrine) could also impact tumour behaviour in a negative manner. Here, for the first time, we associate the immunoreactivity of the kisspeptin/GPR54 ligand-receptor pair with favourable prognosis in a large cohort of ovarian carcinomas.

Immunohistochemical analysis for kisspeptin and GPR54 was performed on a tissue microarray (TMA) consisting of 518 early stage ovarian carcinomas, all with linked clinical outcome data. The TMA was scored using a staining intensity scale of 0 (negative), +1 (mild-moderate), and +2 (strong). Strong staining cases were considered either kisspeptin or GPR54 positive and designated as 1, while all other cases were considered negative and designated 0. All statistical analysis was conducted using two-sided tests and a p value equal to or less than 0.05 was considered significant.