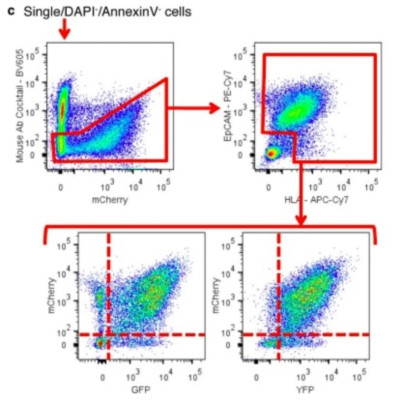 Most human breast cancers have diversified genomically and biologically by the time they become clinically evident. Early events involved in their genesis and the cellular context in which these events occur have thus been difficult to characterize. Here we present the first formal evidence of the shared and independent ability of basal cells and luminal progenitors, isolated from normal human mammary tissue and transduced with a single oncogene (KRAS(G12D)), to produce serially transplantable, polyclonal, invasive ductal carcinomas within 8 weeks of being introduced either subrenally or subcutaneously into immunodeficient mice. DNA barcoding of the initial cells revealed a dramatic change in the numbers and sizes of clones generated from them within 2 weeks, and the first appearance of many ‘new’ clones in tumours passaged into secondary recipients. Both primary and secondary tumours were phenotypically heterogeneous and primary tumours were categorized transcriptionally as ‘normal-like’. This system challenges previous concepts that carcinogenesis in normal human epithelia is necessarily a slow process requiring the acquisition of multiple driver mutations. It also presents the first description of initial events that accompany the genesis and evolution of malignant human mammary cell populations, thereby contributing new understanding of the rapidity with which heterogeneity in their properties can develop.