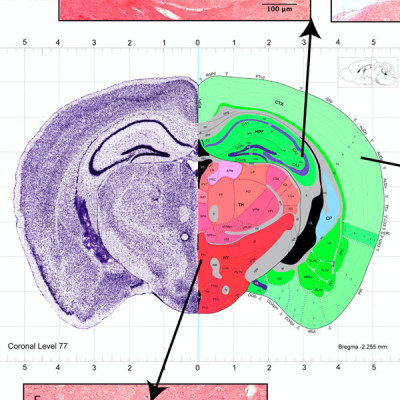 Humans and mice with loss of function mutations in GPR54 (KISS1R) or kisspeptin do not progress through puberty, caused by a failure to release GnRH. The transcriptional networks regulated by these proteins in the hypothalamus have yet to be explored by genome-wide methods.

We show here, using 1 million exon mouse arrays (Exon 1.0 Affymetrix) and quantitative polymerase chain reaction (QPCR) validation to analyse microdissected hypothalamic tissue from Gpr54 and Kiss1 knockout mice, the extent of transcriptional regulation in the hypothalamus. The sensitivity to detect important transcript differences in microdissected RNA was confirmed by the observation of counter-regulation of Kiss1 expression in Gpr54 knockouts and confirmed by immunohistochemistry (IHC). Since Gpr54 and Kiss1 knockout animals are effectively pre-pubertal with low testosterone (T) levels, we also determined which of the validated transcripts were T-responsive and which varied according to genotype alone. We observed four types of transcriptional regulation (i) genotype only dependent regulation, (ii) T only dependent regulation, (iii) genotype and T-dependent regulation with interaction between these variables, (iv) genotype and T-dependent regulation with no interaction between these variables. The results implicate for the first time several transcription factors (e.g. Npas4, Esr2), proteases (Klk1b22), and the orphan 10-transmembrane transporter TMEM144 in the biology of GPR54/kisspeptin function in the hypothalamus. We show for the neuronal activity regulated transcription factor NPAS4, that distinct protein over-expression is seen in the hypothalamus and hippocampus in Gpr54 knockout mice. This links for the first time the hypothalamic-gonadal axis with this important regulator of inhibitory synapse formation. Similarly we confirm TMEM144 up-regulation in the hypothalamus by RNA in situ hybridization and western blot.

Taken together, global transcriptional profiling shows that loss of GPR54 and kisspeptin are not fully equivalent in the mouse hypothalamus.