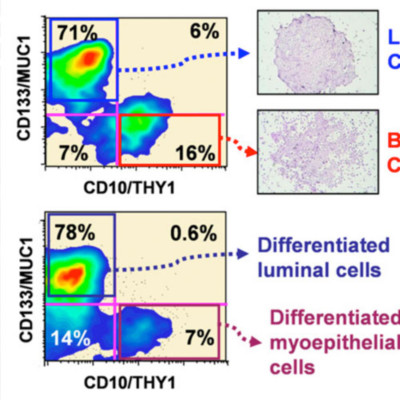 Mature mammary epithelial cells are generated from undifferentiated precursors through a hierarchical process, but the molecular mechanisms involved, particularly in the human mammary gland, are poorly understood. To address this issue, we isolated highly purified subpopulations of primitive bipotent and committed luminal progenitor cells as well as mature luminal and myoepithelial cells from normal human mammary tissue and compared their transcriptomes obtained using three different methods. Elements unique to each subset of mammary cells were identified, and changes that accompany their differentiation in vivo were shown to be recapitulated in vitro. These include a stage-specific change in NOTCH pathway gene expression during the commitment of bipotent progenitors to the luminal lineage. Functional studies further showed NOTCH3 signaling to be critical for this differentiation event to occur in vitro. Taken together, these findings provide an initial foundation for future delineation of mechanisms that perturb primitive human mammary cell growth and differentiation.