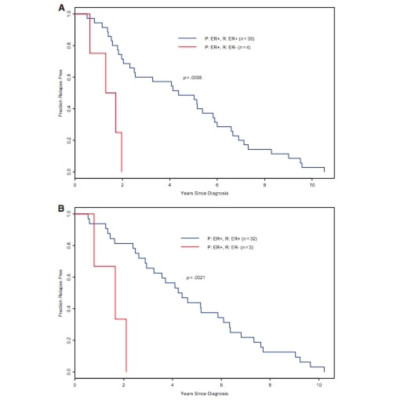 Metastatic breast cancers have historically been presumed to have the same predictive biomarkers as the initial primary tumor. We compared the expression of these biomarkers in a large paired tissue microarray (TMA) series of primary and subsequent relapsed tumors.

Using the British Columbia Cancer Agency Breast Cancer Outcomes Unit database, patients with biopsy-proven relapses were identified and linked to a large TMA series of primary breast cancers from 1986-1992. Charts were reviewed, and tissue blocks of the metastatic cancer were collected to create a separate TMA. Immunohistochemical assessment with the same antibodies and conditions was performed for estrogen receptor (ER), progesterone receptor (PR), and human epidermal growth factor receptor (HER)-2 on both the primary and relapsed tumors.

One hundred sixty cases were received that had tumor adequate for analyses. Of these, 71.9% had no changes in either the ER or PR status or HER-2 status. Of the 45 (28.1%; 95% confidence interval [CI], 21.2%-35.1%) tumors that did have changes in receptor status, 7.5% were in-breast recurrences or new breast primaries, 4.4% had changes in PR status only and were therefore deemed clinically irrelevant, and 19.4% (95% CI, 13.3%-25.5%) had changes in either the ER or HER-2 status from regional or distant relapses. Five percent of tumors had a receptor status change going from ER(+) or PR(+) to ER(-) or PR(-); 9.4% went from ER(-) or PR(-) to ER(+) or PR(+). With regard to HER-2 status, 3.8% of tumors went from positive to negative and 1.3% went from negative to positive. For all discordant cases, biopsies of the relapsed lesion were obtained prior to initiation of first-line treatment for metastatic disease. In the primary tumors that were ER(+), time to relapse was significantly shorter in the discordant relapsed cases than in the concordant ones (p = .0002). Changes in loss or gain of either biomarker were seen across the discordant cases.

A significant proportion of relapsed tumors had changes in either ER or HER-2 status, which would dramatically alter treatment recommendations and clinical behavior. This study suggests that biopsies of relapsed and metastatic breast cancers should be performed routinely in clinical practice.