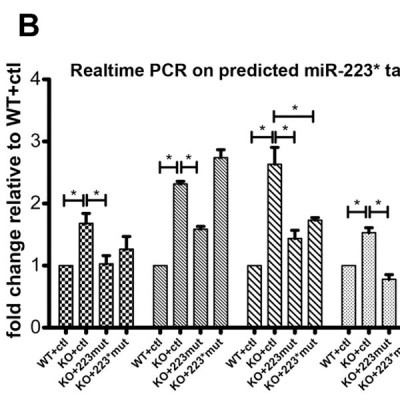 Processing of pre-miRNA through Dicer1 generates an miRNA duplex that consists of an miRNA and miRNA* strand. Despite the general view that miRNAs have no functional role, we further investigated miRNA species in 10 deep-sequencing libraries from mouse and human tissue. Comparisons of miRNA/miRNA* ratios across the miRNA sequence libraries revealed that 50% of the investigated miRNA duplexes exhibited a highly dominant strand. Conversely, 10% of miRNA duplexes showed a comparable expression of both strands, whereas the remaining 40% exhibited variable ratios across the examined libraries, as exemplified by miR-223/miR-223* in murine and human cell lines. Functional analyses revealed a regulatory role for miR-223* in myeloid progenitor cells, which implies an active role for both arms of the miR-223 duplex. This was further underscored by the demonstration that miR-223 and miR-223* targeted the insulin-like growth factor 1 receptor/phosphatidylinositol 3-kinase axis and that high miR-223* levels were associated with increased overall survival in patients with acute myeloid leukemia. Thus, we found a supporting role for miR-223* in differentiating myeloid cells in normal and leukemic cell states. The fact that the miR-223 duplex acts through both arms extends the complexity of miRNA-directed gene regulation of this myeloid key miRNA.