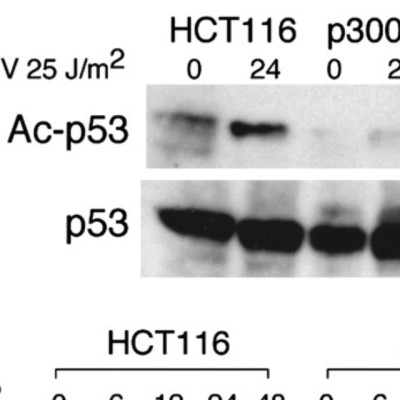 Activation of the tumor suppressor p53 by DNA damage induces either cell cycle arrest or apoptosis, but what determines the choice between cytostasis and death is not clear. In this report, we show that the E1A-binding p300 nucleoprotein is a key determinant of p53-dependent cell fate in colorectal cancer cells: absence of p300 increases apoptosis in response to DNA damage. In addition, p300-deficient (p300(-)) cells fail to undergo G(1)/S arrest after UV irradiation. These abnormalities are associated with prolongation of p53 stability, reduced p53-acetylation, blunting of MDM2 activation, failure to transactivate p21, and a disproportionate increase in PUMA levels. When xenografted, p300(-) cells are more sensitive to chemotherapy with doxorubicin. These results show that p300 is a key regulator of the p53 response and suggest that p300 inhibition could be used to modulate chemotherapy.