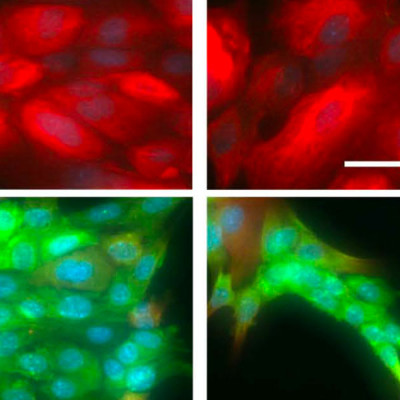 Breast cancer is genetically and clinically a heterogeneous disease. However, the exact contribution of different cell types and oncogenic mutations to this heterogeneity are not well understood. Recently, we discovered an interaction between Wnt and integrin-linked kinase (ILK) within the signaling cascade that regulates cell growth and survival. Interestingly, mammary-specific expression of either one of these proteins has been shown to promote mammary tumorigenesis. In light of our recent findings and to investigate the potential interaction between Wnt and ILK proteins during mammary tumor formation and progression, we established a transgenic mouse model that expresses both Wnt and ILK in mammary epithelial cells.

A novel transgenic mouse model with mammary-specific expression of both Wnt1 and ILK was generated by crossing the two previously characterized mouse models, MMTV-Wnt1 and MMTV-ILK. The resulting MMTV-Wnt/ILK mice were closely monitored for tumor development and growth, as well as for the tumor onset. The molecular phenotypes of both tumors and premalignant mammary glands were investigated by using biochemical and global gene-expression analysis approaches.

A significant acceleration in mammary tumor incidence and growth was observed in the MMTV-Wnt/ILK mice. Pre-neoplastic mammary glands also display lobuloalveolar hyperplasia and an increase in ductal epithelium proliferation. Apart from elevated expression of Wnt/ILK targets, such as beta-catenin and cyclin D1, gene-expression profiling identified the surprising activation of the FOXA1 transcription factor. Upregulation of FOXA1, which is also known as the molecular marker of differentiated mammary luminal cells, was consistent with the expansion of the enriched luminal progenitor population or CD29loCD24hiCD61+ cells in MMTV-Wnt/ILK tumors.

These results show cooperation between Wnt1 and ILK transgenes during mammary carcinogenesis, leading to changes in a transcriptional network, which could dictate a specific breast cancer phenotype with enhanced growth dynamics. The MMTV-Wnt/ILK can be used as a model to identify further the genes downstream of the estrogen receptor-beta/FOXA1 and to investigate the mechanisms targeting the expansion of the luminal progenitor cells leading to hyperplasia and tumorigenesis.