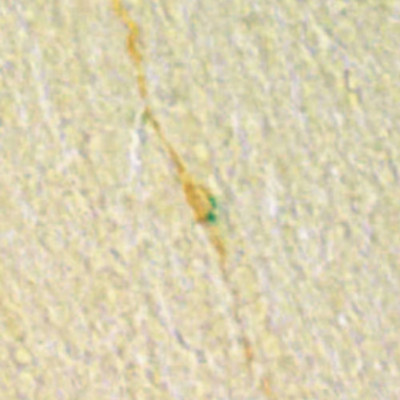 We have recently described a molecular gatekeeper of the hypothalamic-pituitary-gonadal axis with the observation that G protein-coupled receptor 54 (GPR54) is required in mice and men for the pubertal onset of pulsatile luteinizing hormone (LH) and follicle-stimulating hormone (FSH) secretion to occur. In the present study, we investigate the possible central mode of action of GPR54 and kisspeptin ligand. First, we show that GPR54 transcripts are colocalized with gonadotropin-releasing hormone (GnRH) neurons in the mouse hypothalamus, suggesting that kisspeptin, the GPR54 ligand, may act directly on these neurons. Next, we show that GnRH neurons seem anatomically normal in gpr54-/- mice, and that they show projections to the median eminence, which demonstrates that the hypogonadism in gpr54-/- mice is not due to an abnormal migration of GnRH neurons (as occurs with KAL1 mutations), but that it is more likely due to a lack of GnRH release or absence of GnRH neuron stimulation. We also show that levels of kisspeptin injected i.p., which stimulate robust LH and FSH release in wild-type mice, have no effect in gpr54-/- mice, and therefore that kisspeptin acts directly and uniquely by means of GPR54 signaling for this function. Finally, we demonstrate by direct measurement, that the central administration of kisspeptin intracerebroventricularly in sheep produces a dramatic release of GnRH into the cerebrospinal fluid, with a parallel rise in serum LH, demonstrating that a key action of kisspeptin on the hypothalamo-pituitary-gonadal axis occurs directly at the level of GnRH release. The localization and GnRH release effects of kisspeptin thus define GPR54 as a major control point in the reproductive axis and suggest kisspeptin to be a neurohormonal effector.