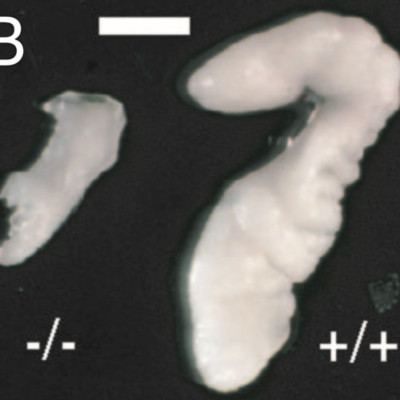 The G protein-coupled receptor GPR54 (AXOR12, OT7T175) is central to acquisition of reproductive competency in mammals. Peptide ligands (kisspeptins) for this receptor are encoded by the Kiss1 gene, and administration of exogenous kisspeptins stimulates hypothalamic gonadotropin-releasing hormone (GnRH) release in several species, including humans. To establish that kisspeptins are the authentic agonists of GPR54 in vivo and to determine whether these ligands have additional physiological functions we have generated mice with a targeted disruption of the Kiss1 gene. Kiss1-null mice are viable and healthy with no apparent abnormalities but fail to undergo sexual maturation. Mutant female mice do not progress through the estrous cycle, have thread-like uteri and small ovaries, and do not produce mature Graffian follicles. Mutant males have small testes, and spermatogenesis arrests mainly at the early haploid spermatid stage. Both sexes have low circulating gonadotropin (luteinizing hormone and follicle-stimulating hormone) and sex steroid (beta-estradiol or testosterone) hormone levels. Migration of GnRH neurons into the hypothalamus appears normal with appropriate axonal connections to the median eminence and total GnRH content. The hypothalamic-pituitary axis is functional in these mice as shown by robust luteinizing hormone secretion after peripheral administration of kisspeptin. The virtually identical phenotype of Gpr54- and Kiss1-null mice provides direct proof that kisspeptins are the true physiological ligand for the GPR54 receptor in vivo. Kiss1 also does not seem to play a vital role in any other physiological processes other than activation of the hypothalamic-pituitary-gonadal axis, and loss of Kiss1 cannot be overcome by compensatory mechanisms.