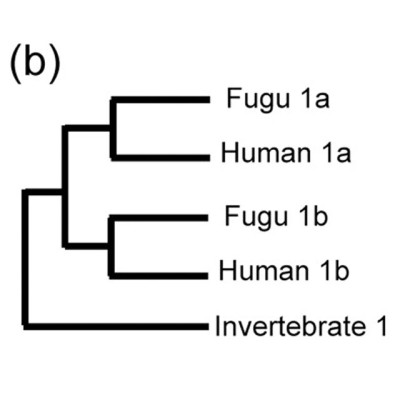 With about 24,000 extant species, teleosts are the largest group of vertebrates. They constitute more than 99% of the ray-finned fishes (Actinopterygii) that diverged from the lobe-finned fish lineage (Sarcopterygii) about 450 MYA. Although the role of genome duplication in the evolution of vertebrates is now established, its role in structuring the teleost genomes has been controversial. At least two hypotheses have been proposed: a whole-genome duplication in an ancient ray-finned fish and independent gene duplications in different lineages. These hypotheses are, however, based on small data sets and lack adequate statistical and phylogenetic support. In this study, we have made a systematic comparison of the draft genome sequences of Fugu and humans to identify paralogous chromosomal regions (“paralogons”) in the Fugu that arose in the ray-finned fish lineage (“fish-specific”). We identified duplicate genes in the Fugu by phylogenetic analyses of the Fugu, human, and invertebrate sequences. Our analyses provide evidence for 425 fish-specific duplicate genes in the Fugu and show that at least 6.6% of the genome is represented by fish-specific paralogons. We estimated the ages of Fugu duplicate genes and paralogons using the molecular clock. Remarkably, the ages of duplicate genes and paralogons are clustered, with a peak around 350 MYA. These data strongly suggest a whole-genome duplication event early during the evolution of ray-finned fishes, probably before the origin of teleosts.