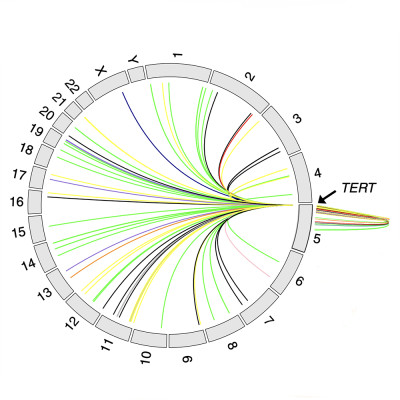 The impact of somatic structural variants (SVs) on gene expression in cancer is largely unknown. Here, as part of the ICGC/TCGA Pan-Cancer Analysis of Whole Genomes (PCAWG) Consortium, which aggregated whole-genome sequencing data and RNA sequencing from a common set of 1220 cancer cases, we report hundreds of genes for which the presence within 100 kb of an SV breakpoint associates with altered expression. For the majority of these genes, expression increases rather than decreases with corresponding breakpoint events. Up-regulated cancer-associated genes impacted by this phenomenon include TERT, MDM2, CDK4, ERBB2, CD274, PDCD1LG2, and IGF2. TERT-associated breakpoints involve ~3% of cases, most frequently in liver biliary, melanoma, sarcoma, stomach, and kidney cancers. SVs associated with up-regulation of PD1 and PDL1 genes involve ~1% of non-amplified cases. For many genes, SVs are significantly associated with increased numbers or greater proximity of enhancer regulatory elements near the gene. DNA methylation near the promoter is often increased with nearby SV breakpoint, which may involve inactivation of repressor elements.