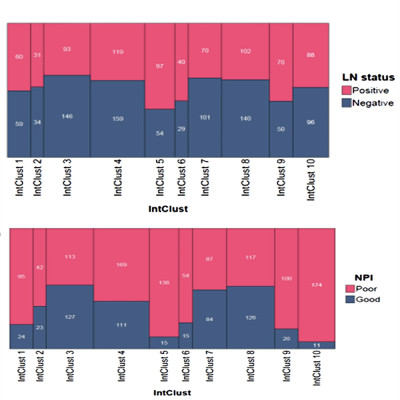 The integration of genomic and transcriptomic profiles of 2000 breast tumours from the METABRIC [Molecular Taxonomy of Breast Cancer International Consortium] cohort revealed ten subtypes, termed integrative clusters (IntClust/s), characterised by distinct genomic drivers. Central histopathology (N = 1643) review was undertaken to explore the relationship between these ten molecular subtypes and traditional clinicopathological features. IntClust subtypes were significantly associated with histological type, tumour grade, receptor status, and lymphocytic infiltration (p < 0.0001). Lymph node status and Nottingham Prognostic Index [NPI] categories were also significantly associated with IntClust subtype. IntClust 3 was enriched for tubular and lobular carcinomas, the latter largely accounting for the association with CDH1 mutations in this cluster. Mucinous carcinomas were not present in IntClusts 5 or 10, but did not show an association with any of the remaining IntClusts. In contrast, medullary-like cancers were associated with IntClust 10 (15/26). Hormone receptor-positive tumours were scattered across all IntClusts. IntClust 5 was dominated by HER2 positivity (127/151), including both hormone receptor-positive (60/72) and hormone receptor-negative tumours (67/77). Triple-negative tumours comprised the majority of IntClust 10 (132/159) and around a quarter of IntClust 4 (52/217). Whilst the ten IntClust subtypes of breast cancer show characteristic patterns of association with traditional clinicopathological variables, no IntClust can be adequately identified by these variables alone. Hence, the addition of genomic stratification has the potential to enhance the biological relevance of the current clinical evaluation and facilitate genome-guided therapeutic strategies.