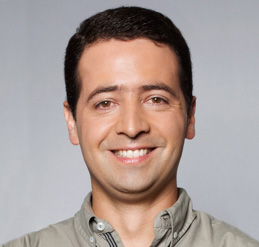 Nuno did his PhD in Biomedical Sciences at the Instituto de Medicina Molecular / University of Lisbon Medical School with Professor Maria do Carmo Fonseca. Most of the PhD research actually took place at the University of Cambridge with Dr. Samuel Aparicio. His PhD work involved bioinformatics studies on the complexity of splicing and gene expression and his efforts include studies on the evolution of splicing factors and the RNA binding of splicing factors.

Nuno was a postdoctoral member of the Computational Biology Group from the University of Cambridge, led by Professor Simon Tavaré and based at the CRUK Cambridge Research Institute, from 2006 to July 2010. His main research in the Computational Biology Group was focused on understanding the complexity of gene expression regulation and its impact on disease mechanisms, namely oncogenesis.

Nuno joined the Blencowe Lab at the University of Toronto in August 2010 and then moved in June 2013 to the iMM for the return phase of his Marie Curie International Outgoing Fellowship. He has been awarded an EMBO Installation Grant and an FCT Investigator Starting Grant and established his own research group at the iMM in the beginning of 2015. Nuno coordinates Bioinformatics Matters, the iMM node of GenomePT. In 2020, he was awarded a 6-year Assistant Researcher contract in FCT’s Individual Call to Scientific Employment Stimulus. Nuno is an Invited Associate Professor at the Faculty of Medicine, University of Lisbon, where he teaches Bioinformatics to Masters in Biomedical Engineering, Oncobiology and Biomedical Research.